The Harmful Effects of Marijuana: is it enough to Quit Smoking Cannabis?

How to Detect and Treat Cocaine Addiction 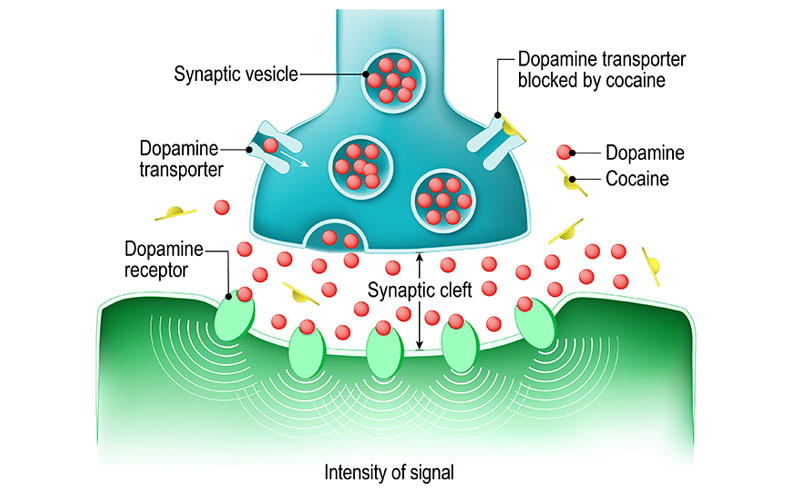 Cocaine is a kind of so-called "psychostimulant" drug. It provides a euphoric effect for a few moments, helps to resist fatigue and inhibits social barriers.

Cocaine comes from coca, which grows in the high mountains of South America. The people of this part of the world used coca leaves as a stimulant. The substance gave the workers in the area more energy to perform their tasks at high altitude, where oxygen is scarce.

Over time, science has been able to boost cocaine's capacity by multiplying its effects. Cocaine was synthesized for the first time in 1855. However, its effects were not recognized by the medical world until 1880. Indeed, one of the first who prescribed this substance was Sigmund Freud. According to him, it was an effective way to fight depression and helplessness. At the beginning of the 20th century, cocaine was consumed by all social classes and could be bought without any restrictions.

How does cocaine use induce pleasure and euphoria?

Cocaine belongs to a class of chemicals called tropanic alkaloids. It stimulates neurons to produce a higher amount of dopamine than normal.

Dopamine is a chemical messenger naturally secreted by the brain that allows certain brain cells or neurons to communicate with each other. Specifically, all sensory experiences that promote our survival cause dopamine release in a specific region of the brain. When dopamine neurons are stimulated, the sensory experience is then increased tenfold. Our nervous system is endowed with neurobiological mechanisms that "push" us to seek and maintain this substance.

Cocaine acts directly on dopamine neurons. Normally, after the release of dopamine, it is quickly re-captured and stops stimulating the neurons. But cocaine will act directly on the dopaminergic system by preventing this re-capture. Dopamine then continues to stimulate neurons (up to 300 times normal), intensifying and prolonging euphoria in the consumer.

The state of dependence is characterized by a compulsive and uncontrollable impulse to obtain and consume the drug, although the consumer knows the harmful effects on his health and his social life. The person addicted to cocaine cannot stop, even if they wish. It is the overstimulation of dopamine neurons, which results from taking drugs, that leads the consumer into a state of pleasure addiction.

Although cocaine is addictive, there are occasional users of cocaine who consume the product only recreationally and who can do without it for long periods of time. Why are some people more vulnerable than others to addiction?

The addiction process involves two other chemical molecules: norepinephrine and serotonin. These neurotransmitters have the role of modulating the different sensory information of the environment, to give them meaning so that the consumer can behave "reasonably" without giving way to impulsivity. This is how the casual consumer, even if he feels the euphoric effects of cocaine, will keep some control over his emotions. He will focus on certain information such as the long-term consequences of taking the product, and he will not become "addicted".

However, a disturbance in the activation of the norepinephrine / serotonin pair prevents the control of emotions. Without this modulation, the consumer who finds himself in a situation of pleasure becomes unable to "channel" his emotions related to the influx of dopamine. He can no longer control his impulsiveness; his reactions are no longer moderate and he then engages in behaviors that privilege a short-term benefit. This individual vulnerability would depend on the person’s genetic background, his environment and personal experience. We are not all equal in the face of addiction.

In conclusion, these complex neurobiological mechanisms suggest that addiction is not a consumer’s "choice". In a way, the dependent consumer is a "slave" to his neurons, he loses control of his behavior and free will is no longer possible.

What is the solution?

To find a solution to the addiction, the first step is to look into your addiction, and realize that you are not happy about it. Then, let’s work on it!

Cocaine addiction is very tough. To overcome the challenge of cocaine cessation, you may need some help. Willpower is important, but it may not be enough. The physiology of addiction requires an actual physical treatment to fix it. The Stop Hard Drugs TM treatment protocol of soft laser auricular therapy from the Stop Centres was developed in-house over a span of 18 years’ experience. It is the combination of ancient wisdom and modern technology. The soft laser beam gently stimulates the production of certain neurotransmitters such as serotonin and endorphin to help you restore the chemical imbalance in the nervous system and become physically independent of cocaine. Our unparalleled natural treatment and friendly, confidential environment will certainly provide you the help you need.