The Harmful Effects of Marijuana: is it enough to Quit Smoking Cannabis?

Alcohol and the effects on the Brain 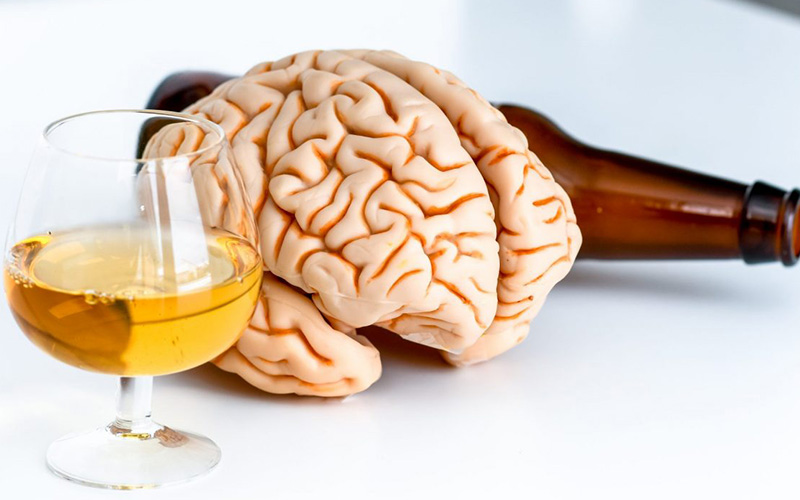 Have you ever felt that you were more cheerful, less stressed, and more social after a couple of drinks? Have you ever experienced the sluggish movements, slurred speech, and clumsiness when you drink too much? Alcohol certainly has strong effects on our brain. It can be pleasant; it can be awful; It can be damaging and can even put you in immediate danger!

How does alcohol affect our brain? It affects our brain either directly with immediate effects or indirectly through changing the health condition of our bodies and causes long-term irreversible damage.

Alcohol is a substance that is capable of altering the levels of neurotransmitters in the brain. Neurotransmitters are chemical messengers that transmit signals between neurons (nerve cells) to control our thought processing, behavior, and emotion. In general, alcohol is a depressant, which means that it can suppress activity of certain neurotransmitters. This contributes to slow reflex and poor coordination after drinking excessive alcohol. However, the inhibition effect, once it is applied to certain inhibitory neurotransmitters, it increases dopamine, a reward-related neurotransmitter, in the reward center of the brain, which gives you the feeling of pleasure.

Directly affecting the brain, alcohol has different effects on different areas of the brain.

On the cerebral cortex, where our consciousness and thoughts are being processed, alcohol depresses the behavioral inhibitory centers, and makes us more outgoing; In the meantime, it slows down the processing of information from our sensory organs, such as eye, ear, and skin. So, this contributes to slow reflex and unclear thoughts. On the cerebellum, alcohol affects the movement and balance control. Therefore, it contributes to the clumsiness after drinking.

On the hippocampus, the brain area responsible for memory creation and retrieval, alcohol was found to shrink this brain structure even in moderate drinkers. The effect correlates with the amount people drink. Those who drink 4 or more drinks per day have 6 times the risk of hippocampal shrinkage as nondrinkers have. On the hypothalamus and pituitary gland, the endocrine control region of the brain, alcohol suppresses sexual arousal and performance. Therefore, although sexual urges may increase, sexual performance decreases.

On the medulla, where the brain controls certain automatic functions such as breathing, consciousness and body temperature, alcohol induces sleepiness. It slows down breathing and lowers body temperature, which may be life-threatening.

Due to the strong effects of alcohol on the brain, the short-term acute effect of alcohol on binge drinkers is blackouts--- a short period of memory lapses in which people forget what happened over entire stretches of time.

Heavy and longtime alcohol can induce thiamine deficiency because alcohol reduces thiamine (vitamin B1) absorption and affects its metabolic process. 80% of alcoholics develop thiamine deficiency. This condition may lead to a serious brain disorder called Wernicke-Korsakoff syndrome (WKS). WKS consists of two different syndromes: Wernicke’s encephalopathy and Korsakoff psychosis. Patients with Wernicke’s encephalopathy have mental confusion, lose the control of eye movement and have difficulty in muscle coordination. The symptoms of Korsakoff psychosis mainly are memory loss and having difficulties forming new memories. Although administering Thiamine helps to improve brain function in the early stages of WKS, permanent damage is the consequence of the late stage of the condition.

We all know long-term alcohol abuse may cause liver damage, but you may not know that longtime liver dysfunction, such as liver cirrhosis, can harm the brain and lead to a serious and potentially fatal brain disorder known as hepatic encephalopathy. The liver malfunction compromises the liver’s capability of detoxification. Therefore, excess amounts of two toxic substances, ammonia and manganese, enter the brain and cause the damage to the brain cells. Hepatic encephalopathy may manifest as changes in sleep patterns, mood and personality; psychiatric conditions such as anxiety and depression; cognitive dysfunctions such as shortened attention span; and problems with coordination.

Since alcohol has potent effects on nerve cells, developing fetal brain is even more susceptible to the influence of alcohol. When the fetal brain gets in contact with an excessive alcohol concentration through the bloodstream from the mother, the normal development of the brain is compromised. It renders fewer neurons in the brain and smaller brain volume, which leads to long-term problems in learning and behavior.

Alcohol is a very dangerous substance that has a strong effect on our brains. Even moderate drinking may affect the function and morphology of the brain. Long-term heavy consumption can cause profound irreversible damage to cognition and memory. The only way to prevent these adverse effects is to fight alcohol addiction and quit drinking. At Stop Centres, well trained specialists can help you overcome the barrier with the Stop Alcohol treatment, the soft laser auricular therapy of the Stop Centres. Let’s work together and bring in a brand new life without alcohol!